As a homeowner, it is normal to worry about potential disasters your home faces. For most people, a fire disaster is one of the worst fears. This is because a fire disaster has the potential to destroy everything, including the lives of family members who may not be lucky enough to escape.

However, fire is just one potential disaster. Another equally devastating example, and one which most homeowners never consider, is flooding. Like fires, floods tend to occur unexpectedly, and may prove lethal. But there are various types of floods that can affect your home, and their levels of devastation vary.

It is worth learning about them so that you can be adequately prepared in the event that you become an unfortunate victim. Read on for a brief look at some types of flooding you should know about as a homeowner.

If you live in a coastal region, coastal flooding is one of the flood types you should be concerned about the most. Coastal flooding occurs when there is an accumulation of water on the land as a result of the effects of waves, tides, heavy rainfall, or storms. Just as the name suggests, this kind of flooding is mostly experienced in coastal areas, especially in regions or cities close to the ocean.

Most of the incidents of coastal floods are severe in nature. This implies that they normally come with serious consequences, including injuries, drowning, contamination of public water sources, a breakout of water-born disease, and destruction of public utilities such as sewer lines and power lines. Coastal flooding may further be classified into three levels as follows-:

You will never have to worry about river flooding or calling for water restoration services due to a flooded river if you live miles away from a river. A river may become flooded when the water rises on top of the river banks. Nearly any size of river or stream has the capability to become flooded, with most rivers having a history of getting flooded at least once every three years. The major cause of river flooding is extreme rainfall from tropical storm systems. Prolonged thunderstorms, as well as melting snow, may also flood some rivers.

It is sometimes possible to predict river flooding, however the associated damages may never be predicted in advance. For example, if the river feeds into a dam, and there is a flooding situation, the dam may break its banks, leading to devastation and water damage for people living downstream. Therefore, if your home is downstream of a major river that feeds into a dam upstream, you should flood-proof your home to minimize the potential damages in the event of the river flooding.

Flash floods have been responsible for causing a lot of water damage not just to homes, but to public infrastructure. Flash floods normally start within six hours of the onset of a heavy downpour. The normal causes of this kind of flooding are severe tropical storms, hurricanes, and thunderstorms. Flash floods may also be caused by a dam failure, or a mudslide, leading to the discharge of monumental volumes of water.

Urban areas are more likely than suburban and rural areas to be affected by flash floods. This implies that the water damage experienced in urban areas is likely to be more significant than in suburban and rural cases. The greatest risk with flash flooding is that it isn’t predictable, and when it occurs, it leaves very little time to do anything about it. The damages that may result from this kind of flooding can be severe and may include the shifting of boulders, uprooting of big and mature trees, and even the destruction of bridges.

If you live in cities, then sewage flooding is a more likely type of flooding to encounter than the rest on this list. Sewage flooding may occur as a result of unexpected heavy downpours, leading to large volumes of water that end up overwhelming facilities such as treatment plants and sewage systems, in turn leading to their breakdown and ultimate release of untreated sewage into water bodies. This is usually the most unpleasant type of flooding since it may lead to sewage backups where the black water is forced back into the house through the toilets, sink, and showers.

Sewage floods are more hazardous since the water it drives back contains dangerous bacteria and chemicals that can cause serious health concerns such as fever, diarrhea, vomiting, and cholera among other issues. If you ever experience this kind of flooding in your home, you need to call for emergency water restoration services immediately so that the situation can be contained as soon as possible. The longer you wait, the more danger you will be exposed to, and the more expensive it may be to contain the situation.

If you ever face water damage as a result of flooding at home, be sure to call KBS Maintenance immediately. We are experts at water damage restoration, and we will ensure that we do our best to help you resume the normal use of your home after the flooding event.

What Should I Consider When Hiring a Water Damage Contractor?

How to Deal With Ceiling Water Damage 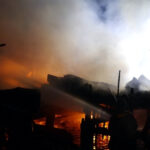 What are the Dangers of Improper Soot Removal from Your Home?

Here is Your Perfect Checklist for Flood Cleanup & Safety Tips